A large gathering of regional non-governmental organisations heard that better dialogue between them, government and donor partners is needed to develop Pacific countries effectively. 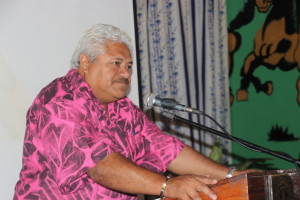 The meeting – held in Nadi from November 4 to 12 – discussed strategic partnerships and acknowledged the support of development partners, including the Australian Aid Programme and the European Union, said Katuke.

The meeting also acknowledged the efforts of regional partners, and NGO representatives reported on their country’s civil society achievements.

“The meeting appreciated the wide range of activities and support that CSOs are providing to underpin country development and the important role of national liaison units,” said Katuke.

Those at the meeting were saddened at the systematic defunding of national and regional NGOs following changes in donor and government priorities, she said. New legislation that negatively affects NGOs was also discussed, as this leads to the breakdown of these organisations.

“Despite these difficulties the meeting recognised that ‘development effectiveness’ is a central agenda topic for all Pacific CSOs, especially given the international recognition by governments of civil society players as development actors in their own right,” said Katuke. “Given that this will require a Pacific-wide effort, participants committed to ensuring wider involvement and engagement at both the regional and national levels.” Representatives requested the Pacific Islands Association of Non Governmental Organisations (PIANGO) Secretariat explore options for financial and technical support to help the Pacific NGO partnership cope with regional issues. PIANGO organised the conference.

A consistent theme throughout the meeting was the need to focus more in advancing gender equality issues – recognising this is fundamentally a human rights issue, said Katuke.

“The meeting acknowledged that while gender equality is an issue to be addressed by both men and women there is a particular need to work on empowering women and eliminating violence against women in the Pacific.”

More sustained dialogue with governments and donors was called for – recognising that governments and CSOs are mutually accountable for development results, said Katuke.

Attendees also received a report on PIANGO’s climate change work and the Kiribati field research it is carrying out with the help of the Kiribati Association of NGOs.

The conference was part of regional and sub-regional consultations being held worldwide as part of the follow-up from an aid effectiveness forum held in December 2011 in Busan, South Korea.