The group, Radiation Exposure Awareness Crusaders for Humanity — Marshall Islands or REACH-MI, officially launched itself in Majuro this week with a program attended by about 40 people. REACH-MI vice president Ellen Milne-Paul said the nuclear test legacy is a cross-cutting issue for the Marshall Islands and a key aim of the new group is to create awareness among the younger generation about the US nuclear testing program. She also said they are running a logo contest among local high schools, offering a $100 prize, that will be announced on the March 1 Nuclear Day national holiday next year that marks the date of the 15-megaton Bravo hydrogen bomb explosion at Bikini Atoll. March 2016 is also the 70th anniversary of the relocation of Bikini Islanders and the start of US nuclear weapons tests in the Marshall Islands.

Keynote speaker Bill Graham, who worked as public advocate at the Nuclear Claims Tribunal for 21 years, applauded REACH-MI for focusing efforts on the still unresolved nuclear legacy. Graham offered advice: Not all cancers are caused by radiation, not all radiation exposure will result in injury, and not all islands in the country received the same levels of radioactive fallout from the 67 nuclear weapons tests at Bikini and Enewetak.

Graham called the compensation package included in the Compact of Free Association a “flawed” agreement, in part because the U.S. government did not share the many historical studies and reports on its nuclear weapons program with Marshall Islands negotiators in the early 1980s. Most of these documents were classified “restricted,” “confidential,” or “secret.”

He described a 1955 report on the Bravo test and the five other large nuclear weapons detonations conducted at Bikini in 1954 that was not declassified and made public until 1994. This report includes charts showing radiation exposure from each test at numerous atolls around the Marshall Islands, he said. The majority of these islands despite their exposure to nuclear test fallout are not acknowledged as “exposed” populations by the U.S. government.

“None of this information was shared with Marshall Islands negotiators,” he said, adding that the U.S., like other countries, “doesn’t want to be held liable for damages it may have caused by exposing human beings to potentially harmful doses of radiation.” 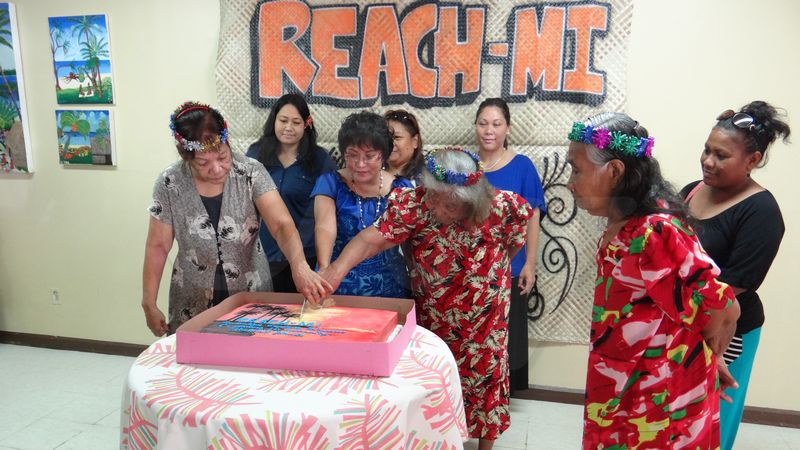 In governments, when something bad happens, “they have a tendency to deny, lie and classify,” he said. This is not unique to the U.S. government, but also happened after the Chernobyl nuclear power plant meltdown in the Ukraine and also in the wake of the Fukushima nuclear power plant accident in Japan. The U.S. government did provide compensation, but the Marshall Islands “didn’t get a fair deal,” he said. “It’s not justice.”

Graham encouraged people involved with REACH-MI to “reach for the stars” in their efforts to create awareness about the nuclear test legacy.

Marshall Islands poet and climate change activist Kathy Jetnil-Kijiner said she supports REACH-MI because grassroots organizations can make a big difference. She described the nuclear testing as “a really traumatic history for us.”

She then delivered a slam poetry presentation on the nuclear testing called “History Project” that she did as a 15-year old high school student in Hawaii. “We still have not gotten justice,” she said in conclusion.

REACH-MI President Rosania Bennett said one of her mentors, Darlene Keju-Johnson, demonstrated the power of working at the grassroots level to create awareness and change. It is the aim of the new group to work with the community and churches to spread awareness and seek justice. She also made the point about reaching out to Americans and the United States to achieve this goal through the Marshalls’ “brotherly love for the U.S.” Justice, she added, is “based on love.”

Three pastors from different churches — Rev. Hainrich George, Rev. Enja Enos and Fr. Raymundo Sabio — each provided a blessing for the event, which included a short presentation of donations from Bank of Marshall Islands and Bank of Guam, and was followed by refreshments.