Women at the forefront of Guam’s decolonisation struggle

Guahan (or Guam) is a Pacific Island in the Micronesian region of Oceania, and a current colony of the United States. The island and her people, the indigenous Chamorus, have experienced nearly 500 years of uninterrupted colonisation, from Spanish, Japanese, and American colonial administrations. Chamorus have resisted colonial policies and militarism since the beginning of the island’s colonisation, and today the island has active independence and anti-militarism movements which advocate for sovereignty and the protection of native land from US military contamination. The movements for a decolonised future have spanned generations, and as a result, Chamoru resistance movements are intimate and rooted in Chamoru cultural practice and worldviews.

Guahan and the native Chamoru people have experienced intense colonisation since 1521, when Magellan sailed to the island. In the article “The Explosive Growth of U.S. Military Power on Guam Confronts People Power: Experience of an island people under Spanish, Japanese and American colonial rule,” LisaLinda Natividad and Victoria-Lola Leon Guerrero write that while Guam remained relatively isolated from Western world powers for 3,500 years, as indicated from the earliest indications of Chamoru settlements, the island’s strategic location as a “crossroad between East and West has resulted in colonization by successive maritime powers over the last six centuries”. Spain was the island’s first coloniser, and the United States made the island a US possession after winning the Spanish-American War in 1898. During this period, the island was governed like a Navy ship, by American-appointed governors. In the article “Navy Blues: US Naval Rule on Guam and The Rough Road to Assimilation, 1898-1941,” Anne Perez Hattori argues that there is much to be learned from how Chamoru people during the Naval rule period accepted, appropriated, or disregarded military tactics devoted to Americanization.

In the book “What We Bury at Night,” Julian Aguon writes that the military “desire for Guam has meant the strategic blocking of the Chamoru … struggle for self-determination”. In other words, the US continues to militarise Guam’s sacred sites, threaten the island’s natural resources with invasive military training practices, and impede the island’s self-determination process in order to maintain their dominance and use of the island for strategic military purposes.

I am a native Chamoru woman, and I was born and raised on Guam. Militarisation and the effects of colonialism are intimately woven throughout both my family history and my present day experiences. In 1917, the US Naval Government instituted an executive general order which banned people from speaking the Chamoru language. When my grandmother was going to school as a child, she saw children get hit with wooden paddles for speaking Chamoru. Her father told her and her siblings that they could only speak Chamoru at home. She did not teach our language to my father or to me. My grandfather’s mother is from Sumay, an ancient Chamoru settlement. During the World War II Japanese occupation of Guam, people from Sumay were forced to march to work camps across the island. After the war, the US Navy did not allow Sumay residents to return home, and Sumay was transformed into Guam’s US Naval Base. Sumay residents were forced to “relocate” to another village that the military created. We are allowed to return to Sumay once a year on “Back to Sumay Day,” with escorts from the military.

Today, one third of the island has been unjustly taken from the Chamoru people and is now in the possession of the US military for use as training grounds and bases. In recent years, the US has announced plans to move 5,000 Marines from Okinawa to Guam. Okinawa has requested the relocation of these Marines due to the high levels of sexual violence that they have committed in the community. I came of age in the context of this planned build-up and the resounding public backlash from Chamoru activism groups. Since I was a teenager, I have been dedicated to learning about my own family history and experience of colonialism. My godmother is the chair of the group Independent Guahan, which is the current manifestation of the movement for Guam’s future as an independent nation.

In Chamoru culture, a maga’håga is the highest ranking woman in a clan. Today, Chamoru culture is still rooted in matriarchal practices and women are at the forefront of decolonisation activism. I have come of age in the tradition of decolonisation activism, through the stories and mentorship of my godmother and the many powerful maga’hågas in my life. I have been active with the group Independent Guahan for the past year. In October 2017, I traveled to New York with Independent Guahan to testify in front of the United Nations and to meet with other island nations regarding Guam’s struggles for decolonisation from the US. As an Independent Guahan delegate to the UN, I also spoke on behalf of Prutehi Litekyan, a direct action group dedicated to the protection of natural and cultural resources in all sites identified for US Department of Defense live-fire training ranges on Guam.

In my work within Guam’s decolonisation and independence movement, I’ve been struck by the dedication and force of our Chamoru women. Decolonisation movements are especially powerful when they transformed and nurtured by our cultural practices. The fact that Chamoru women have been and continue to be on the frontlines of the movement is consistent with the ways that our ancestors revered and honoured the voices of women as leaders. The movement for decolonisation is a lifetime practice and the nature of the work is emotionally and physically exhausting. In order for the movement to be sustainable, it must consist of work that heals us from our collective historical trauma as indigenous people who have experienced generations of colonial violence. When I am mentored and nurtured by my elders and by Chamoru women leaders, I am awed by their vision of decolonial futures and empowered by our shared sense of ancestral resilience. 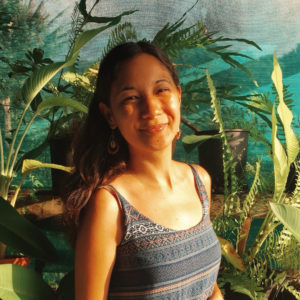 Samantha Marley Barnett is a native Chamoru from the island of Guam, and is actively involved in the struggle for Guam’s future as a decolonised, independent nation. She recently testified at the United Nations regarding the US military abuse and contamination of the island and Guam’s right to self-determination. She is currently a fourth year ethnic studies student at Mills College, and has previously worked for the University of Guam Press – where she focused on promoting indigenous literature – and Aunt Lute Books, a feminist publishing house based in San Francisco.

You can email her at: [email protected]